Your Bell Bottoms Came Back. Your Tech Won’t 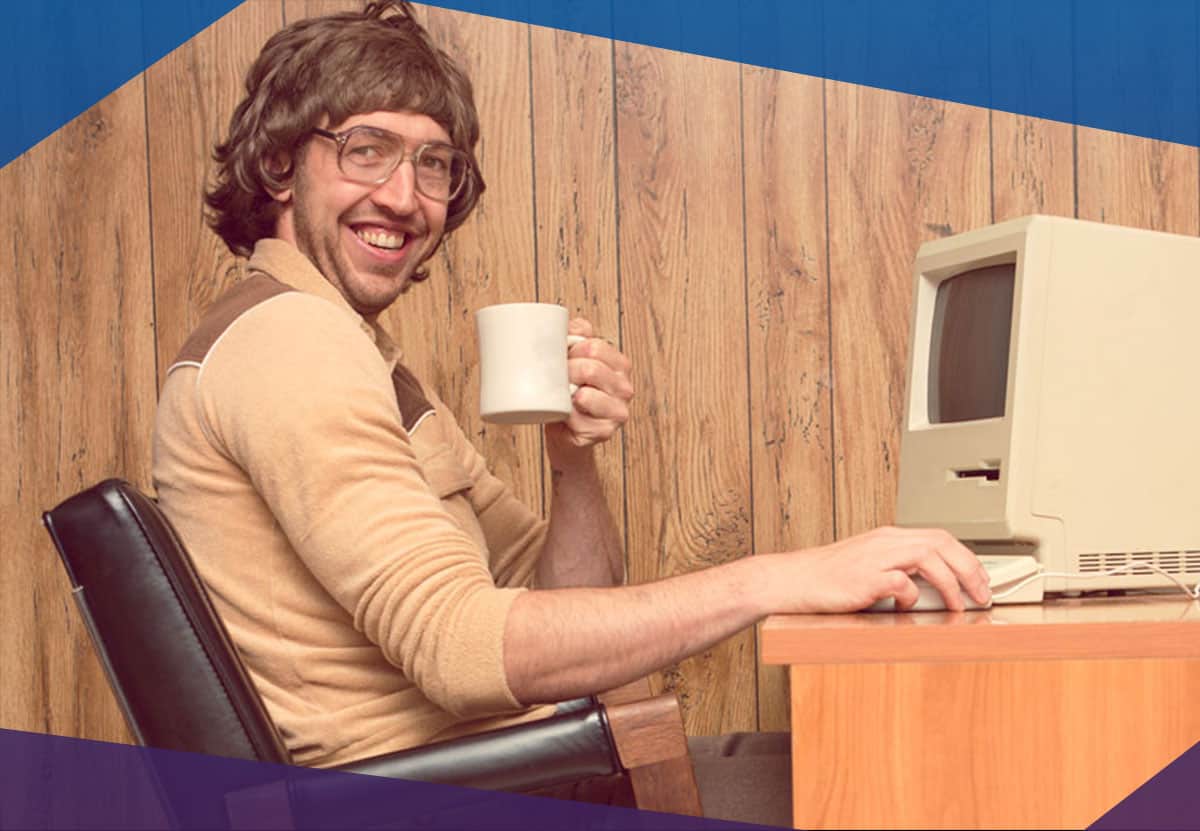 As technology changes at an ever-more-rapid pace, what legacy pieces linger on your network?

It’s safe to say that just about every aspect of business is affected by the way technology has changed over the years. Even the least “plugged-in” people now communicate over VoIP phones, access the web over Wi-Fi, and send email hosted on the cloud. In the last year, virtual meetings became the norm and much of America clocked in to work from home.

Over the decades, the stuff of science fiction has become part of everyday life.

Just as the children of today look backward and find reruns of The Brady Bunch bizarre, those who have lived through technological changes may find themselves in the present feeling surrounded by unfamiliar devices and systems. The business world already used the processes and roles that our digital world has automated, though that doesn’t make the transition through progress any easier. Voicemail and texting take the place of answering services, CEOs and Presidents send memos over email instead of passing printed copies around, and digital files are stored in virtual folders rather than physical ones.

Let’s take a look at just how quickly our lives have changed with the help of members of the Anderson Technologies team.

Dawn of the Computer Era

Technological progress started long before the age of computers. Along with social, familial, and world politics changing society in the 60s, the household television brought shared culture and new products into living rooms across the nation, putting visuals front and center and slowly phasing out the family radio. Washing machines, dryers, and refrigerators helped free up time for a new potential workforce, while elite business and science institutions brought room-filling computers for daily use, upgrading from number-crunching human calculators.

The computer age sped up progress, making it more noticeable over shorter time periods. Starting in the 1970s, computers began to fit on desks, though personal use was still mostly unheard-of. It was the beginning of something new, and inventions like the floppy disc and the first video game console, Atari, were becoming household names—even if they weren’t quite commonplace. Far more ubiquitous were innovations like the VCR, which made home video recording affordable and brought top Hollywood releases to home televisions, and the microwave oven, which made cooking dinners lightning fast. Businesses and families who opted out of early updates made the decision for many reasons: finances, distrust, or reliance on older ways. Regardless of the reason, the result was often that subsequent changes became more difficult.

In the 1980s, the efforts of both Microsoft and Macintosh were in full swing, but the truly “personal” computer was still novel. Principal Farica Chang’s father was an early adopter of the Tandy 1000, and Senior Administrator JR Reynolds played around with an IBM clone running DOS. Likewise, Principal Amy Anderson began using school computers to write papers, which at the time required inserting special character combinations into the text to add new paragraphs or format text. This decade saw the creation of the CD-ROM and the internet, though neither were popularized for years. The introduction of the Nintendo Entertainment System (NES) began Nintendo’s rise in the growing video game market and taught a generation the foibles of dust in technology.

Business Development Executive Libby Powers remembers the pager boom of the 1990s. The messages and codes added a little thrill to life. Pagers made communication versatile, and were certainly more portable and affordable than the massive cell and car phones of the 80s. Nonetheless, pagers would just as quickly become obsolete in the face of cheap cellular advancements. Technologies built on one another opened the world up, and those who experienced it were able to create more and more of what they previously could only imagine.

The Age of the Internet

By the 1990s, a new generation was growing up using technology in their daily lives from childhood. Content Specialist Andrea Glazer loved playing Sesame Street games on her family’s Windows 95 machine, learning to use a mouse and keyboard from an early age. The internet was blooming into the World Wide Web, bringing a new e-commerce industry and the dot-com boom. New sites like Amazon, Ebay, and Yahoo looked far different from their modern incarnations. The popularization of chat rooms, instant messaging, and personal email began to globalize communication and shrink the virtual distance between family and strangers and between questions and answers, which encouraged discourse and knowledge-seeking that excited industry leaders. Amy Anderson recalls working at Southwestern Bell during this period: “I’ll never forget my co-worker, Brian, explaining how the world was about to change.”

By the end of the decade, the most popular computer operating system ever, Windows 7, hit the market and laid the groundwork for the major changes introduced in the 2000s. An AT&T sales rep convinced Principal Mark Anderson to try one of the first cell phones that could fit in a pocket, changing the way he communicated from then on.

Beyond the initial e-commerce explosion of the aughts, business and personal websites became commonplace and expected, with Google emerging as the most frequently used search engine.

Here are some of the biggest technologies introduced to the world in this decade, expanding in usefulness, and creating new ways to live, share, and build:

In the 2010s, technology and business built on the foundations of previous decades flourished. Shifting business models and profit driving brought us to the world of data collection and experience curation, all while increasingly more of the world operated online. Instead of running a server in a backroom or a basement, cloud computing used servers halfway around the world at a fraction of the cost. The Internet of Things connected everyday devices to the internet, creating a web of interconnectivity that thrills, but can also leave us vulnerable. Hybrid and electric vehicles became far more affordable to make and purchase, paving the way for automated and driving-assist cars programmed by AI algorithm, much like almost everything online.

Resistance is often a built-in part of any change, and it can be easy to feel overwhelmed, confused, or downright afraid. More than 100 million PCs continue to run Windows 7, creating an easy portal for criminals to access networks and create catastrophic damage. Many feel that as long as the system still works, why should they need to change and learn a new system all over again?

While the pace of innovation may now feel relentless, adoption can make life easier, expand possibilities, and keep businesses running safely and securely.

Just because something still runs doesn’t mean it’s safe to use. Are you clinging to the technology of the past when more resilient options are now available to help bring your business into the future?

You don’t need to be on the cutting edge to embrace change and expand your business’s possibility, flexibility, and security. Keeping yourself and your business chained to the past could lead to your own obsolescence in the future. Is it frustrating to keep up with technology? The pace of innovation isn’t slowing, so now is the time to reach out to a technology partner like Anderson Technologies to evaluate, architect and set up the right solution for you. Let’s see if we are a right fit to take this burden off your plate.

Interested in a free IT consultation or free IT audit?

PrevPreviousByte-Size Tech: Recovering from a Hack Can Be Pricy
NextDon’t Showcase Secrets on ZoomNext